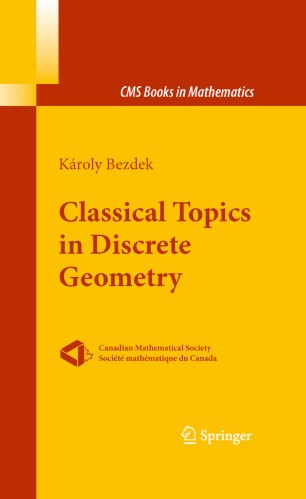 Part of the CMS Books in Mathematics book series (CMSBM)

About the author: Karoly Bezdek received his Dr.rer.nat.(1980) and Habilitation (1997) degrees in mathematics from the Eötvös Loránd University, in Budapest and his Candidate of Mathematical Sciences (1985) and Doctor of Mathematical Sciences (1994) degrees from the Hungarian Academy of Sciences. He is the author of more than 100 research papers and currently he is professor and Canada Research Chair of mathematics at the University of Calgary. About the book: This multipurpose book can serve as a textbook for a semester long graduate level course giving a brief introduction to Discrete Geometry. It also can serve as a research monograph that leads the reader to the frontiers of the most recent research developments in the classical core part of discrete geometry. Finally, the forty-some selected research problems offer a great chance to use the book as a short problem book aimed at advanced undergraduate and graduate students as well as researchers. The text is centered around four major and by now classical problems in discrete geometry. The first is the problem of densest sphere packings, which has more than 100 years of mathematically rich history. The second major problem is typically quoted under the approximately 50 years old illumination conjecture of V. Boltyanski and H. Hadwiger. The third topic is on covering by planks and cylinders with emphases on the affine invariant version of Tarski's plank problem, which was raised by T. Bang more than 50 years ago. The fourth topic is centered around the Kneser-Poulsen Conjecture, which also is approximately 50 years old. All four topics witnessed very recent breakthrough results, explaining their major role in this book.