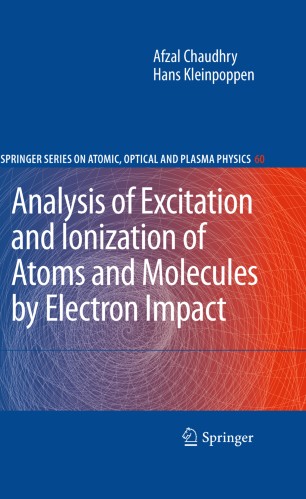 Analysis of Excitation and Ionization of Atoms and Molecules by Electron Impact, by Afzal Chaudhry and Hans Kleinpoppen, describes in detail the measurements of the partial and total doubly differential cross sections for the multiple-ionization of rare gas atoms by electron impact. These measurements show, among other trends, the role of Auger transitions in the production of multiply ionized atoms in the region where the incident electron energy is sufficient to produce inner shell ionization. Other processes like Coster-Kronig transitions and shake off also contribute towards increasing the charge of the ions. As discussed in the book, an incident electron having energy of 6 keV, for example, in a collision with xenon atom can remove up to nine electrons!

The book also delves into the present measurements of the polarization parameters of the fluorescence radiation emitted by the excited atoms of sodium and potassium. It thoroughly investigates the excitation of helium atoms and the helium-like alkaline earth metal atoms of calcium and strontium as well.

This book invites the reader to learn more about the excitation and ionization of atoms and molecules by leading to the discovery of new processes and the excitement of surprising results.