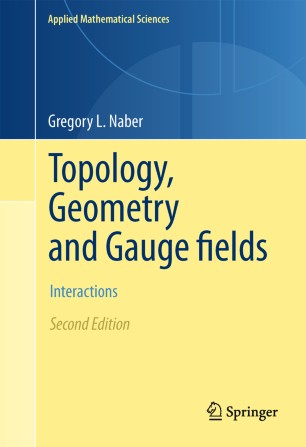 This volume is intended to carry on the program, initiated in Topology, Geometry, and Gauge Fields: Foundations (Springer, 2010), of exploring the interrelations between particle physics and topology that arise from their shared notion of a gauge field. The text begins with a synopsis of the geometrical background  assumed of the reader (manifolds, Lie groups, bundles, connections, etc.). There follows a lengthy, and somewhat informal discussion of a number of the most basic of the classical gauge theories arising in physics, including classical electromagnetic theory and Dirac monopoles, the Klein-Gordon and Dirac equations and SU(2) Yang-Mills-Higgs theory. The real purpose here is to witness such things as spacetime manifolds, spinor structures, de Rham cohomology, and Chern classes arise of their own accord in meaningful physics. All of these are then developed rigorously in the remaining chapters. With the precise definitions in hand, one can, for example, fully identify magnetic charge and instanton number with the Chern numbers of the bundles on which the charge and instanton live, and uncover the obstruction to the existence of a spinor structure in the form of the second Stiefel-Whitney class.  This second edition of the book includes, in an Appendix, a much expanded sketch of Seiberg-Witten gauge theory, including a brief discussion of its origins in physics and its implications for topology.  To provide the reader with the opportunity to pause en route and join in the fun, there are 228 exercises, each an integral part of the development and each located at precisely the point at which it can be solved with optimal benefit.

“Naber’s goal is not to teach a sterile course on geometry and topology, but rather to enable us to see the subject in action, through gauge theory.” (SIAM Review)

“The presentation … is enriched by detailed discussions about the physical interpretations of connections, their curvatures and characteristic classes. I particularly enjoyed Chapter 2 where many fundamental physical examples are discussed at great length in a reader friendly fashion.  No detail is left to the reader’s imagination or interpretation.  I am not aware of another source where these very important examples and ideas are presented at a level accessible to beginners.” (Mathematical Reviews)