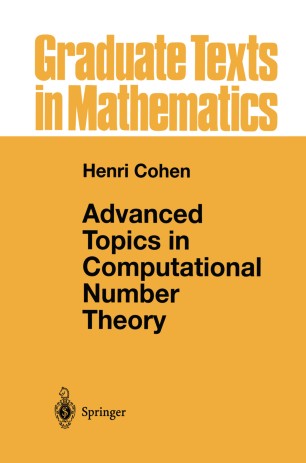 The computation of invariants of algebraic number fields such as integral bases, discriminants, prime decompositions, ideal class groups, and unit groups is important both for its own sake and for its numerous applications, for example, to the solution of Diophantine equations. The practical com­ pletion of this task (sometimes known as the Dedekind program) has been one of the major achievements of computational number theory in the past ten years, thanks to the efforts of many people. Even though some practical problems still exist, one can consider the subject as solved in a satisfactory manner, and it is now routine to ask a specialized Computer Algebra Sys­ tem such as Kant/Kash, liDIA, Magma, or Pari/GP, to perform number field computations that would have been unfeasible only ten years ago. The (very numerous) algorithms used are essentially all described in A Course in Com­ putational Algebraic Number Theory, GTM 138, first published in 1993 (third corrected printing 1996), which is referred to here as [CohO]. That text also treats other subjects such as elliptic curves, factoring, and primality testing. Itis important and natural to generalize these algorithms. Several gener­ alizations can be considered, but the most important are certainly the gen­ eralizations to global function fields (finite extensions of the field of rational functions in one variable overa finite field) and to relative extensions ofnum­ ber fields. As in [CohO], in the present book we will consider number fields only and not deal at all with function fields.