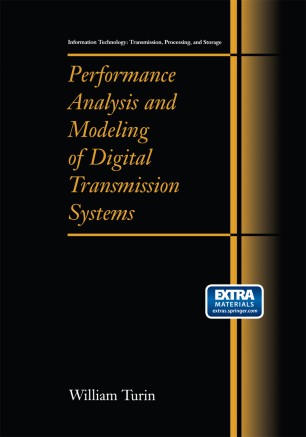 This book is an expanded third edition of the book Performance Analysis of Digital Transmission Systems, originally published in 1990. Second edition of the book titled Digital Transmission Systems: Performance Analysis and Modeling was published in 1998. The book is intended for those who design communication systems and networks. A computer network designer is interested in selecting communication channels, error protection schemes, and link control protocols. To do this efficiently, one needs a mathematical model that accurately predicts system behavior. Two basic problems arise in mathematical modeling: the problem of identifying a system and the problem of applying a model to the system analysis. System identification consists of selecting a class of mathematical objects to describe fundamental properties of the system behavior. We use a specific class of hidden Markov models (HMMs) to model communication systems. This model was introduced by C. E. Shannon more than 50 years ago as a Noisy Discrete Channel with a finite number of states. The model is described by a finite number of matrices whose elements are estimated on the basis of experimental data. We develop several methods of model identification and show their relationship to other methods of data analysis, such as spectral methods, autoregressive moving average CARMA) approximations, and rational transfer function approximations.