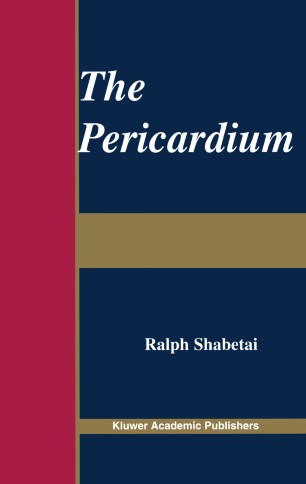 Many noteworthy advances in our knowledge of the pericardium, its functions and diseases and their relation to heart failure have been made since the first edition of this book appeared in 1981; and no other book that covers in detail the physiology and pathophysiology has since been published. The first edition was favourably received, and I have frequently been asked to write a new edition. My own knowledge in the years that have passed since then, and my clinical and research experience in the field of the subject have both increased. For all these reasons, I decided that the second edition was overdue. The long time that has elapsed between editions necessitated rewriting, rather than simply revising, most of the text. For the same reason, many of the figures are new. Most of the references I have cited appeared in the literature after 1981, but I have retained a number of earlier ones, either because they are classics or, in my opinion, have not yet been bettered. It is my hope that the new edition will be a useful resource for clinicians called upon to manage patients with pericardial disease and for physiologists when the pericardium is relevant to their investigations. I make no apology for the in-depth treatment of the pericardial physiology and pathophysiology throughout the book, for they are the foundation on which diagnosis, hemodynamic and imaging studies, and management must rest.