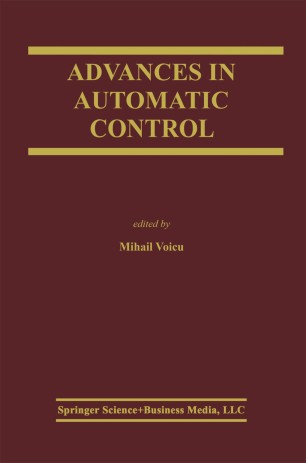 Part of the The Springer International Series in Engineering and Computer Science book series (SECS, volume 754)

During the academic year 2002-2003, the Faculty of Automatic Control and Computer Engineering of Ia~i (Romania), and its Departments of Automatic Control and Industrial Informatics and of Computer Engineering respectively, celebrated 25 years from the establishment of the specialization named Automatic Control and Computer Engineering within the framework of the former Faculty of Electrical Engineering of Ia~i, and, at the same time, 40 years since the first courses on Automatic Control and Computers respectively, were introduced in the curricula of the former specializations of Electromechanical Engineering and Electrical Power Engineering at the already mentioned Faculty of Electrical Engineering. The reader interested to know some important moments ofour evolution during the last five decades is invited to see the Addendum ofthis volume, where a short history is presented. And, to highlight once more the nice coincidences, it must be noted here that in 2003 our Technical University "Gheorghe Asachi" of Ia~i celebrated 190 years from the emergence of the first cadastral engineering degree course in Ia~i (thanks to the endeavor ofGheorghe Asachi), which is today considered to be the beginningofthe engineering higher education in Romania. Generally speaking, an anniversary is a celebration meant to mark special events ofthe past, with festivities to be performed solemnly and publicly according to a specific ritual.