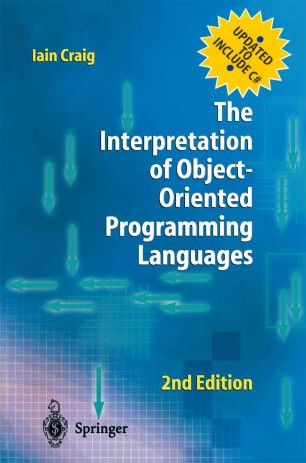 The Interpretation of Object-Oriented Programming Languages

I was extremely surprised to learn that this book was so well received; I was even more surprised when a second edition was proposed. I had realised that there was a need for a book such as this but had not thought that the need was as great; I really wrote the book for myself, in order better to organise my thoughts on object-oriented languages and better to understand them. For the second edition, I have found and corrected mistakes and have added a completely new chapter on the C# language. The chapter on mixed­ paradigm languages has been relegated to an appendix, and a new appendix on the BeCecil language has been added. - C# is extremely popular. Given its apparent role as the major competitor to Java, it was clear that a chapter was necessary in which a comparison could be made. That chapter concentrates on the language and not on the runtime and support system. C# contributes some new features to the C++ derivatives. The language has rough edges (as Java does still) . It will be interesting to watch its development and to see whether it becomes accepted more widely.