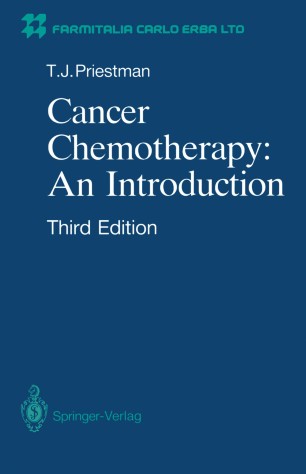 This book is intended as an introduction to the drug treatment of cancer. It is almost ten years since the last edition was written. In the intervening time, there have been numerous developments in cancer chemotherapy and in order to cover these the majority of the text has been completely revised and rewritten. In addition, two new chapters have been introduced, one on the safe handling of cytotoxic drugs and the other on biological response modifiers. In order to incorporate this new information without any undue increase in the length of the text the chapters on a combined approach to treatment have been omitted. This is not because interdisciplinary collaboration is no longer considered important but is a reflection of the fact that, in most centres, it has become the norm in cancer management and its central role in successful treatment no longer needs to be stressed quite so strongly. The four chapters in the last edition which dealt with the team approach to cancer therapy have been replaced by a single chapter on the place of chemotherapy in the overall treatment of cancer. Unfortunately, despite all the innovations of the last decade, it has become increasingly clear that much of the promise offered by drug treatment during the 1960s and 1970s has not been fulfilled.