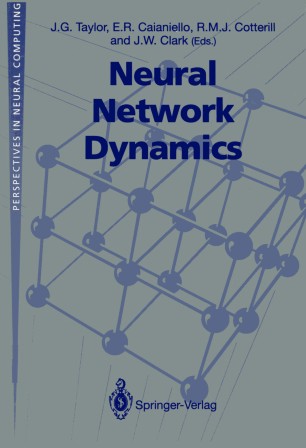 Proceedings of the Workshop on Complex Dynamics in Neural Networks, June 17–21 1991 at IIASS, Vietri, Italy

Part of the Perspectives in Neural Computing book series (PERSPECT.NEURAL)

Neural Network Dynamics is the latest volume in the Perspectives in Neural Computing series. It contains papers presented at the 1991 Workshop on Complex Dynamics in Neural Networks, held at IIASS in Vietri, Italy. The workshop encompassed a wide range of topics in which neural networks play a fundamental role, and aimed to bridge the gap between neural computation and computational neuroscience. The papers - which have been updated where necessary to include new results - are divided into four sections, covering the foundations of neural network dynamics, oscillatory neural networks, as well as scientific and biological applications of neural networks. Among the topics discussed are: A general analysis of neural network activity; Descriptions of various network architectures and nodes; Correlated neuronal firing; A theoretical framework for analyzing the behaviour of real and simulated neuronal networks; The structural properties of proteins; Nuclear phenomenology; Resonance searches in high energy physics; The investigation of information storage; Visual cortical architecture; Visual processing. Neural Network Dynamics is the first volume to cover neural networks and computational neuroscience in such detail. Although it is primarily aimed at researchers and postgraduate students in the above disciplines, it will also be of interest to researchers in electrical engineering, medicine, psychology and philosophy.