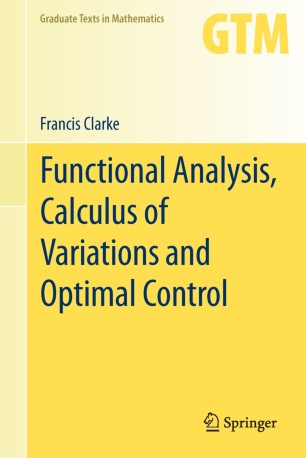 Functional analysis owes much of its early impetus to problems that arise in the calculus of variations. In turn, the methods developed there have been applied to optimal control, an area that also requires new tools, such as nonsmooth analysis. This self-contained textbook gives a complete course on all these topics. It is written by a leading specialist who is also a noted expositor.

This book provides a thorough introduction to functional analysis and includes many novel elements as well as the standard topics. A short course on nonsmooth analysis and geometry completes the first half of the book whilst the second half concerns the calculus of variations and optimal control. The author provides a comprehensive course on these subjects, from their inception through to the present. A notable feature is the inclusion of recent, unifying developments on regularity, multiplier rules, and the Pontryagin maximum principle, which appear here for the first time in a textbook. Other major themes include existence and Hamilton-Jacobi methods.

Functional Analysis, Calculus of Variations and Optimal Control is intended to support several different courses at the first-year or second-year graduate level, on functional analysis, on the calculus of variations and optimal control, or on some combination. For this reason, it has been organized with customization in mind. The text also has considerable value as a reference. Besides its advanced results in the calculus of variations and optimal control, its polished presentation of certain other topics (for example convex analysis, measurable selections, metric regularity, and nonsmooth analysis) will be appreciated by researchers in these and related fields.