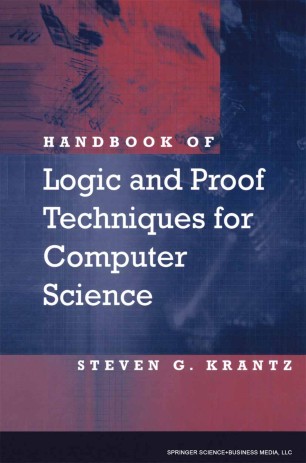 Handbook of Logic and Proof Techniques for Computer Science

Logic is, and should be, the core subject area of modern mathemat­ ics. The blueprint for twentieth century mathematical thought, thanks to Hilbert and Bourbaki, is the axiomatic development of the subject. As a result, logic plays a central conceptual role. At the same time, mathematical logic has grown into one of the most recondite areas of mathematics. Most of modern logic is inaccessible to all but the special­ ist. Yet there is a need for many mathematical scientists-not just those engaged in mathematical research-to become conversant with the key ideas of logic. The Handbook of Mathematical Logic, edited by Jon Bar­ wise, is in point of fact a handbook written by logicians for other mathe­ maticians. It was, at the time of its writing, encyclopedic, authoritative, and up-to-the-moment. But it was, and remains, a comprehensive and authoritative book for the cognoscenti. The encyclopedic Handbook of Logic in Computer Science by Abramsky, Gabbay, and Maibaum is a wonderful resource for the professional. But it is overwhelming for the casual user. There is need for a book that introduces important logic terminology and concepts to the working mathematical scientist who has only a passing acquaintance with logic. Thus the present work has a different target audience. The intent of this handbook is to present the elements of modern logic, including many current topics, to the reader having only basic mathe­ matical literacy.