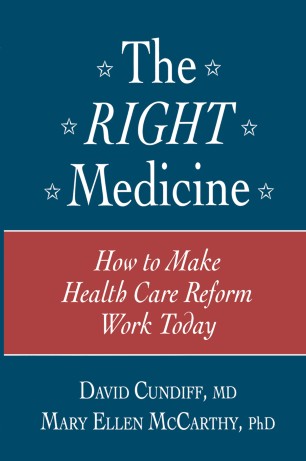 When Dr. David Cundiff called me with a proposal to help research and write The Right Medicine I was intrigued but skep­ tical. His ideas for reform of the US health care system were visionary, radical, and highly original-but would they work? As a Wall Street analyst and long-time student of the health care system, I had my doubts. had read David's book on hospice care, Euthanasia Is Not the I Answer, and was impressed. And I had recently witnessed the slow death of my grandmother from the complications of Alzheimer's disease. Despite the fact that she was and had been suffering for years and despite the fact that her care was an extraordinary emotional and financial burden, nursing home administrators and physicians encouraged one last ditch treat­ ment after another, pulling her back each time from the brink of what would have been a merciful death. I knew that David was correct in his contention that hospice care and a more spar­ ing application of high technology medicine were major keys to improving health care. I also realized, after a decade of analyzing the health care industry, that a government-funded system along the lines of Canada's was probably the only way to rein in rampant infla­ tion and provide universal coverage. But David had other ideas, too. He argued that preventive care could dramatically cut both the incidence and costs associ­ ated with the most common causes of illness in America today.