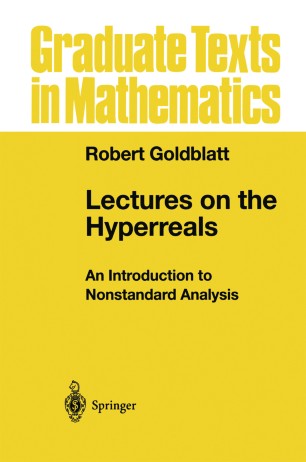 An Introduction to Nonstandard Analysis

There are good reasons to believe that nonstandard analysis, in some ver­ sion or other, will be the analysis of the future. KURT GODEL This book is a compilation and development of lecture notes written for a course on nonstandard analysis that I have now taught several times. Students taking the course have typically received previous introductions to standard real analysis and abstract algebra, but few have studied formal logic. Most of the notes have been used several times in class and revised in the light of that experience. The earlier chapters could be used as the basis of a course at the upper undergraduate level, but the work as a whole, including the later applications, may be more suited to a beginning graduate course. This prefacedescribes my motivationsand objectives in writingthe book. For the most part, these remarks are addressed to the potential instructor. Mathematical understanding develops by a mysterious interplay between intuitive insight and symbolic manipulation. Nonstandard analysis requires an enhanced sensitivity to the particular symbolic form that is used to ex­ press our intuitions, and so the subject poses some unique and challenging pedagogical issues. The most fundamental ofthese is how to turn the trans­ fer principle into a working tool of mathematical practice. I have found it vi Preface unproductive to try to give a proof of this principle by introducing the formal Tarskian semantics for first-order languages and working through the proofofLos's theorem.