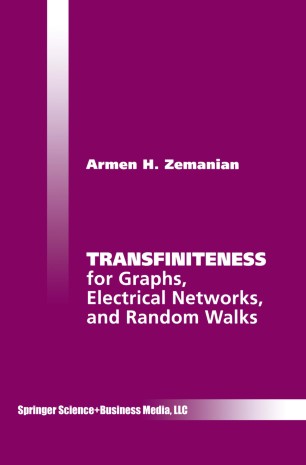 "What good is a newborn baby?" Michael Faraday's reputed response when asked, "What good is magnetic induction?" But, it must be admitted that a newborn baby may die in infancy. What about this one- the idea of transfiniteness for graphs, electrical networks, and random walks? At least its bloodline is robust. Those subjects, along with Cantor's transfinite numbers, comprise its ancestry. There seems to be general agreement that the theory of graphs was born when Leonhard Euler published his solution to the "Konigsberg bridge prob­ lem" in 1736 [8]. Similarly, the year of birth for electrical network theory might well be taken to be 184 7, when Gustav Kirchhoff published his volt­ age and current laws [ 14]. Ever since those dates until just a few years ago, all infinite undirected graphs and networks had an inviolate property: Two branches either were connected through a finite path or were not connected at all. The idea of two branches being connected only through transfinite paths, that is, only through paths having infinitely many branches was never invoked, or so it appears from a perusal of various surveys of infinite graphs [17], [20], [29], [32]. Our objective herein is to explore this idea and some of its ramifications. It should be noted however that directed graphs having transfinite paths have appeared in set theory [6, Section 4.