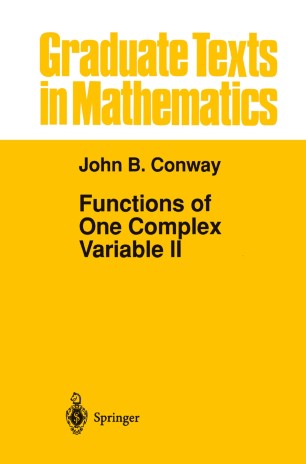 Functions of One Complex Variable II

This is the sequel to my book Functions of One Complex Variable I, and probably a good opportunity to express my appreciation to the mathemat­ ical community for its reception of that work. In retrospect, writing that book was a crazy venture. As a graduate student I had had one of the worst learning experiences of my career when I took complex analysis; a truly bad teacher. As a non-tenured assistant professor, the department allowed me to teach the graduate course in complex analysis. They thought I knew the material; I wanted to learn it. I adopted a standard text and shortly after beginning to prepare my lectures I became dissatisfied. All the books in print had virtues; but I was educated as a modern analyst, not a classical one, and they failed to satisfy me. This set a pattern for me in learning new mathematics after I had become a mathematician. Some topics I found satisfactorily treated in some sources; some I read in many books and then recast in my own style. There is also the matter of philosophy and point of view. Going from a certain mathematical vantage point to another is thought by many as being independent of the path; certainly true if your only objective is getting there. But getting there is often half the fun and often there is twice the value in the journey if the path is properly chosen.