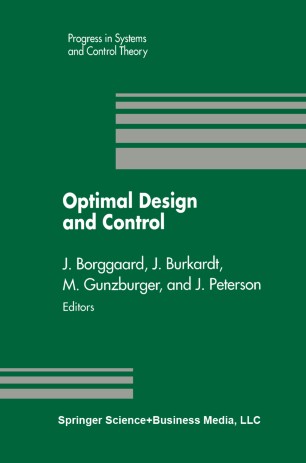 Proceedings of the Workshop on Optimal Design and Control Blacksburg, Virginia April 8–9, 1994

Part of the Progress in Systems and Control Theory book series (PSCT, volume 19)

This volume is the proceedings of the Workshop on Optimal Design and Control that was held in Blacksburg, Virginia, April 8-9, 1994. The workshop was spon­ sored by the Air Force Office of Scientific Research through the Air Force Center for Optimal Design and Control (CODAC) at Virginia Tech. The workshop was a gathering of engineers and mathematicians actively in­ volved in innovative research in control and optimization, with emphasis placed on problems governed by partial differential equations. The interdisciplinary nature of the workshop and the wide range of subdisciplines represented by the partici­ pants enabled an exchange of valuable information and also led to significant dis­ cussions about multidisciplinary optimization issues. One of the goals of the work­ shop was to include laboratory, industrial, and academic researchers so that anal­ yses, algorithms, implementations, and applications could all be well-represented in the talks; this interdisciplinary nature is reflected in these proceedings. An overriding impression that can be gleaned from the papers in this volume is the complexity of problems addressed by not only those authors engaged in appli­ cations, but also by those engaged in algorithmic development and even mathemat­ ical analyses. Thus, in many instances, systematic approaches using fully nonlin­ ear constraint equations are routinely used to solve control and optimization prob­ lems, in some cases replacing ad-hoc or empirically based procedures.