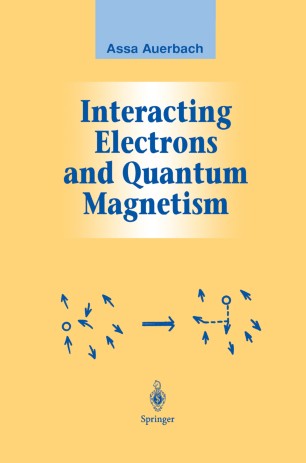 In the excitement and rapid pace of developments, writing pedagogical texts has low priority for most researchers. However, in transforming my lecture l notes into this book, I found a personal benefit: the organization of what I understand in a (hopefully simple) logical sequence. Very little in this text is my original contribution. Most of the knowledge was collected from the research literature. Some was acquired by conversations with colleagues; a kind of physics oral tradition passed between disciples of a similar faith. For many years, diagramatic perturbation theory has been the major theoretical tool for treating interactions in metals, semiconductors, itiner­ ant magnets, and superconductors. It is in essence a weak coupling expan­ sion about free quasiparticles. Many experimental discoveries during the last decade, including heavy fermions, fractional quantum Hall effect, high­ temperature superconductivity, and quantum spin chains, are not readily accessible from the weak coupling point of view. Therefore, recent years have seen vigorous development of alternative, nonperturbative tools for handling strong electron-electron interactions. I concentrate on two basic paradigms of strongly interacting (or con­ strained) quantum systems: the Hubbard model and the Heisenberg model. These models are vehicles for fundamental concepts, such as effective Ha­ miltonians, variational ground states, spontaneous symmetry breaking, and quantum disorder. In addition, they are used as test grounds for various nonperturbative approximation schemes that have found applications in diverse areas of theoretical physics.