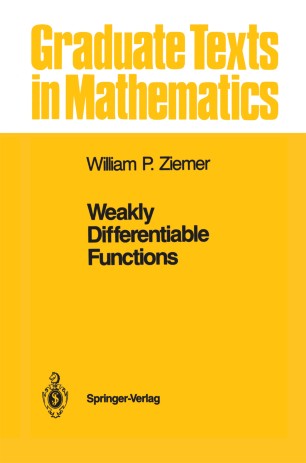 The term "weakly differentiable functions" in the title refers to those inte­ n grable functions defined on an open subset of R whose partial derivatives in the sense of distributions are either LP functions or (signed) measures with finite total variation. The former class of functions comprises what is now known as Sobolev spaces, though its origin, traceable to the early 1900s, predates the contributions by Sobolev. Both classes of functions, Sobolev spaces and the space of functions of bounded variation (BV func­ tions), have undergone considerable development during the past 20 years. From this development a rather complete theory has emerged and thus has provided the main impetus for the writing of this book. Since these classes of functions play a significant role in many fields, such as approximation theory, calculus of variations, partial differential equations, and non-linear potential theory, it is hoped that this monograph will be of assistance to a wide range of graduate students and researchers in these and perhaps other related areas. Some of the material in Chapters 1-4 has been presented in a graduate course at Indiana University during the 1987-88 academic year, and I am indebted to the students and colleagues in attendance for their helpful comments and suggestions.