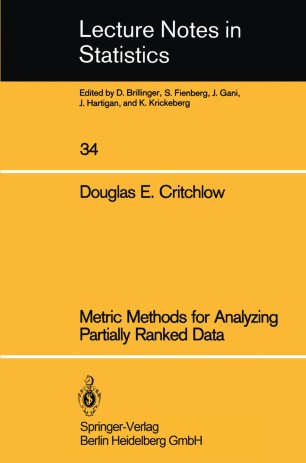 A full ranking of n items is simply an ordering of all these items, of the form: first choice, second choice, •. . , n-th choice. If two judges each rank the same n items, statisticians have used various metrics to measure the closeness of the two rankings, including Ken­ dall's tau, Spearman's rho, Spearman's footrule, Ulam's metric, Hal1l11ing distance, and Cayley distance. These metrics have been em­ ployed in many contexts, in many applied statistical and scientific problems. Thi s monograph presents genera 1 methods for extendi ng these metri cs to partially ranked data. Here "partially ranked data" refers, for instance, to the situation in which there are n distinct items, but each judge specifies only his first through k-th choices, where k < n. More complex types of partially ranked data are also investigated. Group theory is an important tool for extending the metrics. Full rankings are identified with elements of the permutation group, whereas partial rankings are identified with points in a coset space of the permutation group. The problem thus becomes one of ex­ tending metrics on the permutation group to metrics on a coset space of the permutation group. To carry out the extens"ions, two novel methods -- the so-called Hausdorff and fixed vector methods -- are introduced and implemented, which exploit this group-theoretic structure. Various data-analytic applications of metrics on fully ranked data have been presented in the statistical literature.