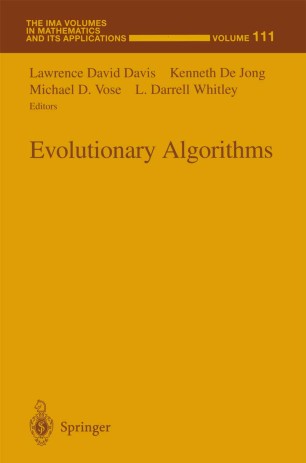 Part of the The IMA Volumes in Mathematics and its Applications book series (IMA, volume 111)

This IMA Volume in Mathematics and its Applications EVOLUTIONARY ALGORITHMS is based on the proceedings of a workshop that was an integral part of the 1996-97 IMA program on "MATHEMATICS IN HIGH-PERFORMANCE COMPUTING." I thank Lawrence David Davis (Tica Associates), Kenneth De Jong (Computer Science, George Mason University), Michael D. Vose (Computer Science, The University of Tennessee), and L. Darrell Whitley (Computer Science, Colorado State University) for their excellent work in organizing the workshop and for editing the proceedings. Further appreciation is ex­ tended to Donald G. Truhlar (Chemistry and Supercomputing Institute, University of Minnesota) who was also one of the workshop organizers. In addition, I also take this opportunity to thank the National Science Foundation (NSF), Minnesota Supercomputing Institute (MSI), and the Army Research Office (ARO), whose financial support made the workshop possible. Willard Miller, Jr., Professor and Director v PREFACE The IMA Workshop on Evolutionary Algorithms brought together many of the top researchers working in the area of Evolutionary Com­ putation for a week of intensive interaction. The field of Evolutionary Computation has developed significantly over the past 30 years and today consists a variety of subfields such as genetic algorithms, evolution strate­ gies, evolutionary programming, and genetic programming, each with their own algorithmic perspectives and goals.