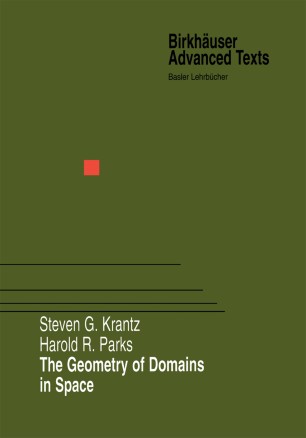 The Geometry of Domains in Space

The analysis of Euclidean space is well-developed. The classical Lie groups that act naturally on Euclidean space-the rotations, dilations, and trans­ lations-have both shaped and guided this development. In particular, the Fourier transform and the theory of translation invariant operators (convolution transforms) have played a central role in this analysis. Much modern work in analysis takes place on a domain in space. In this context the tools, perforce, must be different. No longer can we expect there to be symmetries. Correspondingly, there is no longer any natural way to apply the Fourier transform. Pseudodifferential operators and Fourier integral operators can playa role in solving some of the problems, but other problems require new, more geometric, ideas. At a more basic level, the analysis of a smoothly bounded domain in space requires a great deal of preliminary spadework. Tubular neighbor­ hoods, the second fundamental form, the notion of "positive reach", and the implicit function theorem are just some of the tools that need to be invoked regularly to set up this analysis. The normal and tangent bundles become part of the language of classical analysis when that analysis is done on a domain. Many of the ideas in partial differential equations-such as Egorov's canonical transformation theorem-become rather natural when viewed in geometric language. Many of the questions that are natural to an analyst-such as extension theorems for various classes of functions-are most naturally formulated using ideas from geometry.