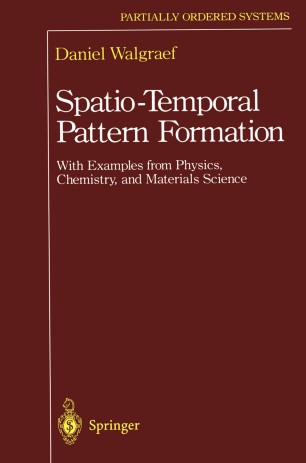 With Examples from Physics, Chemistry, and Materials Science

Spatio-temporal patterns appear almost everywhere in nature, and their description and understanding still raise important and basic questions. However, if one looks back 20 or 30 years, definite progress has been made in the modeling of insta­ bilities, analysis of the dynamics in their vicinity, pattern formation and stability, quantitative experimental and numerical analysis of patterns, and so on. Universal behaviors of complex systems close to instabilities have been determined, leading to the wide interdisciplinarity of a field that is now referred to as nonlinear science or science of complexity, and in which initial concepts of dissipative structures or synergetics are deeply rooted. In pioneering domains related to hydrodynamics or chemical instabilities, the interactions between experimentalists and theoreticians, sometimes on a daily basis, have been a key to progress. Everyone in the field praises the role played by the interactions and permanent feedbacks between ex­ perimental, numerical, and analytical studies in the achievements obtained during these years. Many aspects of convective patterns in normal fluids, binary mixtures or liquid crystals are now understood and described in this framework. The generic pres­ ence of defects in extended systems is now well established and has induced new developments in the physics of laser with large Fresnel numbers. Last but not least, almost 40 years after his celebrated paper, Turing structures have finally been ob­ tained in real-life chemical reactors, triggering anew intense activity in the field of reaction-diffusion systems.