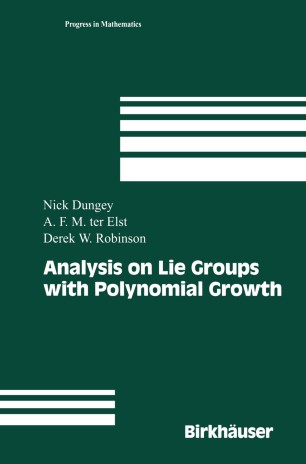 Part of the Progress in Mathematics book series (PM, volume 214)

Analysis on Lie Groups with Polynomial Growth is the first book to present a method for examining the surprising connection between invariant differential operators and almost periodic operators on a suitable nilpotent Lie group. It deals with the theory of second-order, right invariant, elliptic operators on a large class of manifolds: Lie groups with polynomial growth. In systematically developing the analytic and algebraic background on Lie groups with polynomial growth, it is possible to describe the large time behavior for the semigroup generated by a complex second-order operator with the aid of homogenization theory and to present an asymptotic expansion. Further, the text goes beyond the classical homogenization theory by converting an analytical problem into an algebraic one.

This work is aimed at graduate students as well as researchers in the above areas. Prerequisites include knowledge of basic results from semigroup theory and Lie group theory.