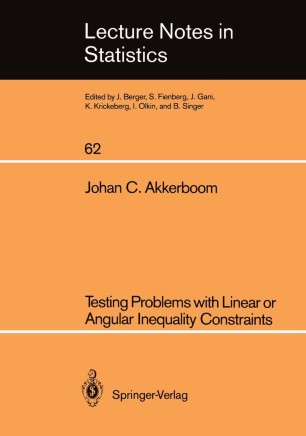 Represents a self-contained account of a new promising and generally applicable approach to a large class of one-sided testing problems, where the alternative is restricted by at least two linear inequalities. It highlights the geometrical structure of these problems. It gives guidance in the construction of a so-called Circular Likelihood Ratio (CLR) test, which is obtained if the linear inequalities, or polyhedral cone, are replaced by one suitable angular inequality, or circular cone. Such a test will often constitute a nice and easy-to-use compromise between the LR-test and a suitable linear test against the original alternative. The book treats both theory and practice of CLR-tests. For cases with up to 13 linear inequalities, it evaluates the power of CLR-tests, derives the most stringent CLR-test, and provides tables of critical values. It is of interest both to the specialist in order- restricted inference and to the statistical consultant in need of simple and powerful one-sided tests. Many examples are worked out for ANOVA, goodness-of-fit, and contingency table problems. Case studies are devoted to Mokken's one- dimensional scaling model, one-sided treatment comparison in a two-period crossover trial, and some real data ANOVA- layouts (biology and educational psychology).