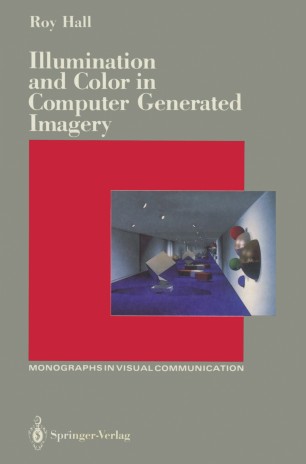 Part of the Monographs in Visual Communication book series (VISUALCOMM)

In a very broad sense the historical development of computer graphics can be considered in three phases, each a giant step down the road towards "realistic" computer generated images. The first, during the late 1960's and early 1970's, can perhaps be characterized as the "wire frame" era. Basically pictures were composed of lines. Considerable em­ phasis was placed on "real time" interactive manipulation of the model. As models became more complex and as raster technology developed, eliminating the hidden lines or hidden surfaces from the image became critical for visual understanding. This requirement resulted in the second phase of computer graphics, the "hidden surface" era, that developed during the 1970's and early 1980's. The names associated with hidden surface algorithms read like a who's who of computer graphics. The cul­ mination of the hidden surface era and the beginning of the current and third era in computer graphics, the "rendering" era, was Turner Whitted's incorporation of a global illumination model into the ray trac­ ing algorithm. Now the goal was not just to generate an image, but to generate a realistic appearing image.