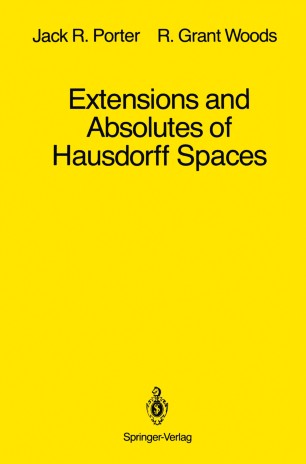 Extensions and Absolutes of Hausdorff Spaces

An extension of a topological space X is a space that contains X as a dense subspace. The construction of extensions of various sorts - compactifications, realcompactifications, H-elosed extension- has long been a major area of study in general topology. A ubiquitous method of constructing an extension of a space is to let the "new points" of the extension be ultrafilters on certain lattices associated with the space. Examples of such lattices are the lattice of open sets, the lattice of zero-sets, and the lattice of elopen sets. A less well-known construction in general topology is the "absolute" of a space. Associated with each Hausdorff space X is an extremally disconnected zero-dimensional Hausdorff space EX, called the Iliama absolute of X, and a perfect, irreducible, a-continuous surjection from EX onto X. A detailed discussion of the importance of the absolute in the study of topology and its applications appears at the beginning of Chapter 6. What concerns us here is that in most constructions of the absolute, the points of EX are certain ultrafilters on lattices associated with X. Thus extensions and absolutes, although very different, are constructed using similar tools.