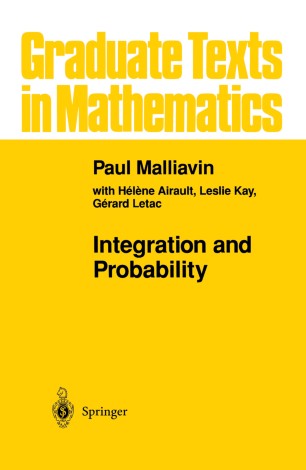 It is a distinct pleasure to have the opportunity to introduce Professor Malliavin's book to the English-speaking mathematical world. In recent years there has been a noticeable retreat from the level of ab­ straction at which graduate-level courses in analysis were previously taught in the United States and elsewhere. In contrast to the practices used in the 1950s and 1960s, when great emphasis was placed on the most general context for integration and operator theory, we have recently witnessed an increased emphasis on detailed discussion of integration over Euclidean space and related problems in probability theory, harmonic analysis, and partial differential equations. Professor Malliavin is uniquely qualified to introduce the student to anal­ ysis with the proper mix of abstract theories and concrete problems. His mathematical career includes many notable contributions to harmonic anal­ ysis, complex analysis, and related problems in probability theory and par­ tial differential equations. Rather than developed as a thing-in-itself, the abstract approach serves as a context into which special models can be couched. For example, the general theory of integration is developed at an abstract level, and only then specialized to discuss the Lebesgue measure and integral on the real line. Another important area is the entire theory of probability, where we prefer to have the abstract model in mind, with no other specialization than total unit mass. Generally, we learn to work at an abstract level so that we can specialize when appropriate.