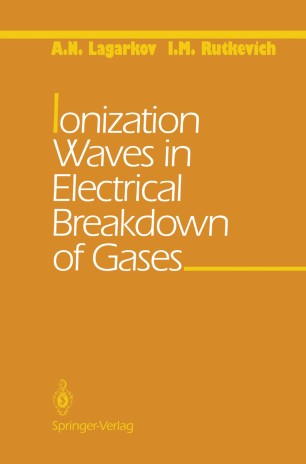 In the years since the book of Lozanskii and Firsov "The Theory of Spark" [1975] was published, a number of experimental and theoretical studies in the physics of electric breakdown in gases were conducted. As a result of these studies, the concept of a wavelike nature of breakdown initiated by single high-voltage electric pulses or by a constant electric field was confirmed. Theoretical models in which the concept of breakdown in a constant external field was developed were first exposed in the above-named book in the chapter "Development of a streamer regarded as an ionization wave," written by Rodin and Starostin. This book treats the initial stage of electric breakdown as a wave pro­ cess. The wavelike nature of the phenomena under consideration is pre­ sented for streamers and sliding discharges, for electric breakdown develop­ ment in long discharge tubes as well as in gas-filled gaps. Chapter 1 gives a qualitative consideration of phenomena determin­ ing the electric breakdown of gases. The experimental data and theoretical results are exposed and discussed with application to streamers, plane ion­ ization waves, breakdown waves in long tubes, and propagation of sliding discharges. The subject of this chapter may be considered as an area of applications of different theoretical models, formulas, and estimates that are presented in other chapters of the book.