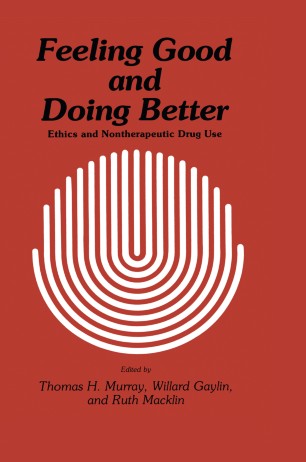 Ethics and Nontherapeutic Drug Use

The place of drugs in American society is a problem more apt to evoke diatribe than dialog. With the support of the Na­ tional Science Foundation's program on Ethics and Values in Science and Technology, and the National Endowment for the Humanities' program on Science, Technology, and Human Values, * The Hastings Center was able to sponsor such dialog as part of a major research into the ethics of drug use that spanned two years. We assembled a Research Group from leaders in the scientific, medical, legal, and policy com­ munities, leavened with experts in applied ethics, and brought them together several times a year to discuss the moral, legal and social issues posed by nontherapeutic drug use. At times we also called on other experts when we needed certain issues clarified. We did not try to reach a consensus, yet several broad areas of agreement emerged: That our society's response to nontherapeutic drug use has been irrational and inconsistent; that our attempts at control have been clumsy and ill-informed; that many complex moral values are entwined in the debate and cannot be reduced to a simple conflict between individual liberty and state paternalism. Of course each paper should be read as the statement of that particular author or authors. The views expressed in this book do not necessarily represent the views of The Hastings Center, the National Science Foundation, or the National En­ dowment for the Humanities.