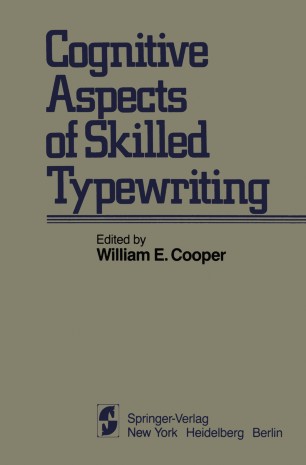 This volume marks the 75th anniversary of the publication of William Book's 1908 The Psychology of Skill, in which typewriting received its first large-scale treatment from a psychological standpoint. As Book realized early on, this form of human behavior is particularly well suited to testing psychological theories of complex motor skill and its acquisition, present­ ing as it does a task that richly engages cognitive and motor components of programming, yet involves a form of response output that can be readily quantified. Now that typewriting is practiced so widely in workday circumstances, studying this activity offers the additional prospect of practical applicability. Until recently, relatively few studies had been conducted on the psychology of typewriting. One might speculate that this dearth of interest stemmed in part from the fact that researchers themselves rarely undertook the activity, delegating it instead to the secretarial pool. Psychological research on piano playing has produced a literature more sizable than the one on typewriting, yet the latter activity has probably been practiced for many more total human hours in this century. But contemporary developments in word processing technology have moved the typewriter into the researcher's office, and in recent years interest in accompanying psychological issues has grown.