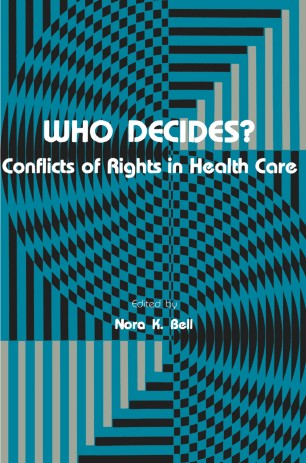 Conflicts of Rights in Health Care

Many of the demands being voiced for a "humanizing" of health care center on the public's concern that they have some say In determining what happens to the individual in health care institutions. The essays in this volume address fundamental questions of conflicts of rights and autonomy as they affect four selected, controversial areas in health care ethics: the Limits of Professional Autonomy, Refusing! Withdrawing from Treatment, Electing "Heroic" Measures, and Advancing Reproductive Technology. Each of the topics is addressed in such a way that it includes an examination of the locus of responsibility for ethical decision­ making. The topics are not intended to exhaustively review those areas of health care provision where conflicts of rights might be said to be an issue. Rather they constitute an examination of the difficulties so often encountered in these specific contexts that we hope will illuminate similar conflicts in other problem areas by raising the level of the reader's moral awareness. Many books in bioethics appeal only to a limited audience in spite of the fact that their subject matter is of deep personal concern to everyone. In part, this is true because they are frequently written from the perspective of a single discipline or a single profession. As a result, one is often left with the impression that such a book views the philosophical, historical, and! or theological problems as essentially indifferent to clinical, legal, and! or policy-making problems.