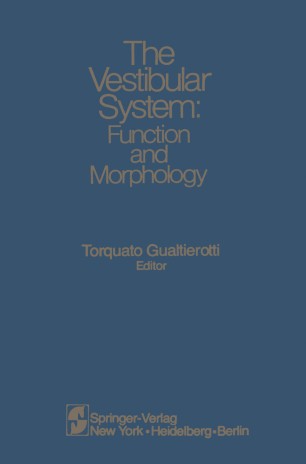 The Vestibular System: Function and Morphology

Vestibular physiology has acquired new interest in the past few years. The development of fast aircraft, beginning during the Second World War and continuing through modern supersonic jets and space travel, has increased dramatically the acceleration range to which man is subjected, from prolonged weightlessness to several gs. The labyrinth measures all kinds of acceleration, including gravity. and therefore has taken on particular impor­ tance in the study of human health in the Space Age. It is understandable. then, that NASA sponsored the Symposium on Vestibular Function and Morphology. a satellite of the Eighth Annual Meeting of the Society of Neuroscience. held October 30-November 1. 1978, at the University of Pittsburgh, which also supported the symposium. The present volume was developed from papers originally presented there. My strategy in editing this book has been to focus upon the vestibular end organ and its direct connections. both peripheral and central, in order to as­ sure a coherent discussion of the basics of vestibular function, structure, and ultrastructure. Fortunately, it was possible to secure the contributions of a number of outstanding investigators from both the United States and abroad, including functionally oriented morphologists. ultrastructuralists, biophysicists, and vestibular physiologists. The result is a comprehensive discussion of the main mechanisms of the labyrinth: the transduction pro­ cess at the receptor level, in the semicircular canals, and in the utricular and saccular maculae; the information transfer through neuronal pathways to the nuclei and the cerebellum; and the general organization of the system.