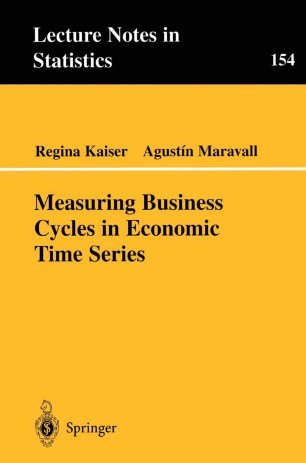 lengths, that could not be captured with univariate linear filters. Exam­ ples of research in both directions can be found in Sims (1977), Lahiri and Moore (1991), Stock and Watson (1993), and Hamilton (1994) and (1989). Although the first approach is known to present serious limitations,the new and more sophisticated methods developed in the second approach (most notably, multivariate and nonlinear extensions) are at an early stage, and have proved still unreliable, displaying poor behavior when moving away from the sample period . Despite the fact that business cycle estimation is basic to the conduct of macroeconomic policy and to monitoring of the economy, many decades of attention have shown that formal modeling of economic cycles is a frustrating issue. As Baxter and King (1999) point out, we still face at present the same basic question "as did Burns and Mitchell fifty years ago: how should one isolate the cyclical component of an eco­ nomic time series? In particular, how should one separate business-cycle elements from slowly evolving secular trends, and rapidly varying seasonal or irregular components?" Be that as it may, it is a fact that measuring (in some way) the busi­ ness cycle is an actual pressing need of economists, in particular of those related to the functioning of policy-making agencies and institutions, and of applied macroeconomic research.