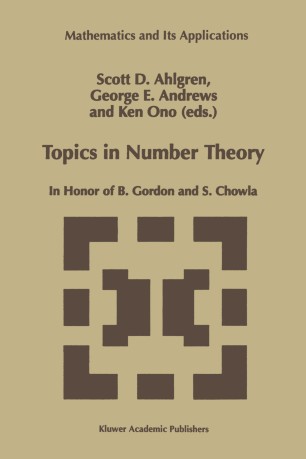 In Honor of B. Gordon and S. Chowla

Part of the Mathematics and Its Applications book series (MAIA, volume 467)

From July 31 through August 3,1997, the Pennsylvania State University hosted the Topics in Number Theory Conference. The conference was organized by Ken Ono and myself. By writing the preface, I am afforded the opportunity to express my gratitude to Ken for beng the inspiring and driving force behind the whole conference. Without his energy, enthusiasm and skill the entire event would never have occurred. We are extremely grateful to the sponsors of the conference: The National Sci­ ence Foundation, The Penn State Conference Center and the Penn State Depart­ ment of Mathematics. The object in this conference was to provide a variety of presentations giving a current picture of recent, significant work in number theory. There were eight plenary lectures: H. Darmon (McGill University), "Non-vanishing of L-functions and their derivatives modulo p. " A. Granville (University of Georgia), "Mean values of multiplicative functions. " C. Pomerance (University of Georgia), "Recent results in primality testing. " C. Skinner (Princeton University), "Deformations of Galois representations. " R. Stanley (Massachusetts Institute of Technology), "Some interesting hyperplane arrangements. " F. Rodriguez Villegas (Princeton University), "Modular Mahler measures. " T. Wooley (University of Michigan), "Diophantine problems in many variables: The role of additive number theory. " D. Zeilberger (Temple University), "Reverse engineering in combinatorics and number theory. " The papers in this volume provide an accurate picture of many of the topics presented at the conference including contributions from four of the plenary lectures.