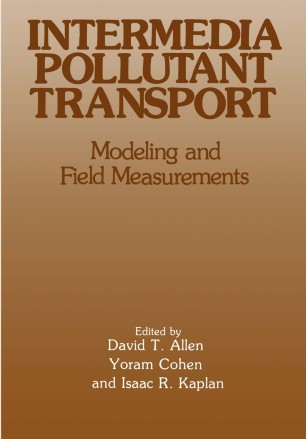 The National Center for Intermedia Transport Research (NCITR) was established at UCLA in 1982 by EPA as one of six Centers of Excellence for the study of environmental pollution problems. One of the functions undertaken by the NCITR has been to hold periodic workshops and to provide a forum for the discussion of current topiCS in the environmental pollution arena. To this end, two other workshops have previously been held. The first, held in November 1982, was chaired by H. R. Pruppacher, R. G. Semonin and W. G. N. Slinn on Precipitation Scavenging, Dry DepOSition and Resuspension. The second, held in January 1986, was chaired by Y. Cohen on Pollution Transport and Accumulation in a Multimedia Environment. The present workshop, chaired by D. T. Allen, Y. Cohen and I. R. Kaplan, was held on August 24-26, 1988 in Santa Monica, California. The title of the workshop was Intermedia Pollutant Transport: Modeling and Field Measurements. Approximately one hundred individuals participated and twenty five papers were given, mostly by invitation. The workshop was divided into the following four broad topiCS: 1) Transport of Pollutants from the Atmosphere, 2) Transport of Pollutants from Soils and Groundwaters, 3) Transport of Pollutants from Lakes and Oceans, and 4) Multimedia Transport of Pollutants. The last afternoon was reserved for a Panel Discussion.