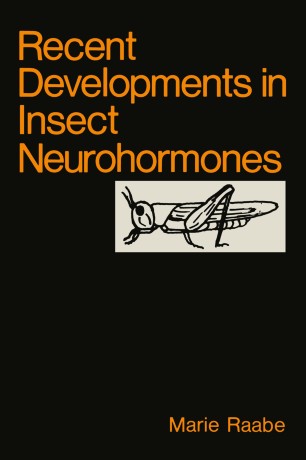 The most striking fact revealed by investigations of insect neurohormones is that insects are as well supplied with neurohormones as mammals, since neurohor­ mones regulate not only the functioning of the endocrine glands, prothoracic gland, and corpora allata, but also most physiological processes. Our knowledge of neurohormones developed originally from anat­ omocytological investigations and experimental studies. Today, accurate bio­ assays have been devised for studying both in vivo and in vitro physiological processes, and RIA determination has yielded knowledge of titer modifications of humoral factors. Much is also known about neurohormone purification, and several neurohormones have even been identified in different species. Immunocytochemistry has made it possible to demonstrate in their origin and release sites the presence of insect neurohormones whose structure has been elucidated. Moreover, the presence of vertebrate and invertebrate neuropeptides has been demonstrated in insects. As regards biogenic amines, methods of detection have been greatly refined and it is now possible to identify the cell bodies and axons of the main biogenic amines. Other new methods, such as cobalt chloride impregnation or Lucifer yellow staining, have revealed the axonal pathways and the location of particular neurons. The mechanisms of action of neurohormones have been investigated in several cases and the results of these investigations will be related in the chapters which follow.