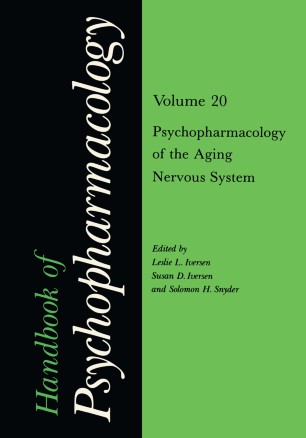 "Psychopharmacology of the Aging Nervous System" was selected as the topic for Volume 20 of the Handbook of PsychopharmacoloffY. Senile dementia is now widely recognized as a medical and social problem likely to reach epidemic proportions by the turn of the century. By that time it is esti­ mated that almost 20% of the population in most developed countries will be over the age of 65 and at a conservative estimate 1 in 10 of them will suffer from a dementing illness. Many symposia have appeared over the last few years describing the neuropathological and neurochemical deficiencies in Alzheimer's and other forms of dementia, the neuropsychological features of the disease, and attempts to treat it. In this volume, we have selected topics and authors who are beginning to question some of the earlier assumptions and to ask different questions about dementia. In the first four chapters the neuropathology and neu­ rochemistry of dementia are reevaluated. It is important to understand the relationship between the formation of amyloid plaques and neurofibrillary tangles, the progressive degeneration in cortex, and the neurochemical deafferentation of cortex. In particular, the possibility is considered that the most severe pathology is seen in a well-defined limbo/cortical circuitry known to be involved in mnemonic processing. The growing interest in the genetic determinants of familial Alz­ heimer's is reviewed. It is also recognized that detailed comparisons of the neural and psychological characteristics of the various degenerative dis­ eases that impair cognitive processing may be valuable.