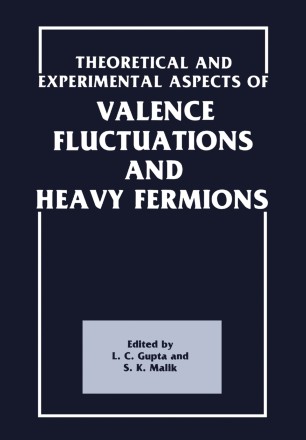 Theoretical and Experimental Aspects of Valence Fluctuations and Heavy Fermions

During the Koln meeting (August 28-31, 1984), Irdia was chosen as the venue for the next International Conference on Valence Fluctuations. lhis was in recognition ard appreciation of the work done, both experimental ard theoretical, by the Irdian scientists in this area during the last decade. We decided to hold this Conference in the month of January, 1987 at Bangalore. lhe subject of Valence Fluctuations has kept itself alive ard active as it has provided many shocks ard suprises particularly among the Ce- ard U-based intermetallies. lhe richness of many interesting physical phenomena occurring in mixed valent materials, the flexibility of modifying their physical properties (by alloying, for example) ard the possibility of synthesizing a wide variety of new such materials seem to be the key factors in this regard. Barely six months before this Conference, an International Conference on Anomalous Rare Earths and Actinides (ICAREA) had been held at Grenoble (July, 1986) which also focussed on mixed valence ard heavy fermion phenomena. In spite of this, the response to this' Conference was very enthusiastic and encouraging. Many interesting ard important results were presented at this Conference which have been included in this volume.