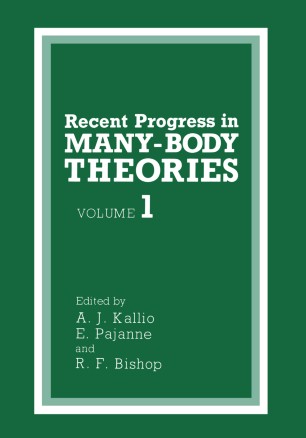 The present volume contains the texts of the invited talks delivered at the Fifth International Conference on Recent Progress in Many-Body Theories held in Oulu, Finland during the period 3-8 August 1987. The general format and style of the meeting followed closely those which had evolved from the earlier conferences in the series: Trieste 1978, Oaxtepec 1981, Altenberg 1983 and San Francisco 1985. Thus, the conferences in this series are in­ tended, as far as is practicable, to cover in a broad and balanced fashion both the entire spectrum of theoretical tools developed to tackle the quan­ tum many-body problem, and their major fields of· application. One of the major aims of the series is to foster the exchange of ideas and techniques among physicists working in such diverse areas of application of many-body theories as nucleon-nucleon interactions, nuclear physics, astronomy, atomic and molecular physics, quantum chemistry, quantum fluids and plasmas, and solid-state and condensed matter physics. A special feature of the present meeting however was that particular attention was paid in the programme to such topics of current interest in solid-state physics as high-temperature superconductors, heavy fermions, the quantum Hall effect, and disorder. A panel discussion was also organised during the conference, under the chair­ manship of N. W. Ashcroft, to consider the latest developments in the extreme­ ly rapidly growing field of high-T superconductors.