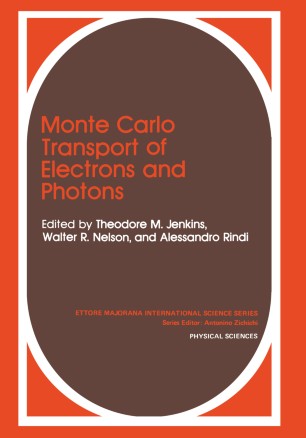 For ten days at the end of September, 1987, a group of about 75 scientists from 21 different countries gathered in a restored monastery on a 750 meter high piece of rock jutting out of the Mediterranean Sea to discuss the simulation of the transport of electrons and photons using Monte Carlo techniques. When we first had the idea for this meeting, Ralph Nelson, who had organized a previous course at the "Ettore Majorana" Centre for Scientific Culture, suggested that Erice would be the ideal place for such a meeting. Nahum, Nelson and Rogers became Co-Directors of the Course, with the help of Alessandro Rindi, the Director of the School of Radiation Damage and Protection, and Professor Antonino Zichichi, Director of the "Ettore Majorana" Centre. The course was an outstanding success, both scientifically and socially, and those at the meeting will carry the marks of having attended, both intellectually and on a personal level where many friendships were made. The scientific content of the course was at a very high caliber, both because of the hard work done by all the lecturers in preparing their lectures (e. g. , complete copies of each lecture were available at the beginning of the course) and because of the high quality of the "students", many of whom were accomplished experts in the field. The outstanding facilities of the Centre contributed greatly to the success. This volume contains the formal record of the course lectures.