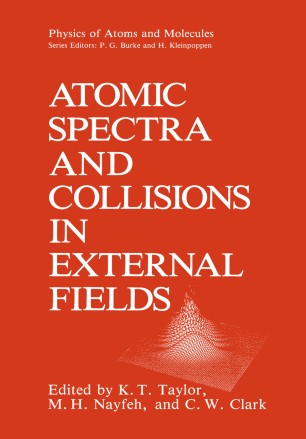 Part of the Physics of Atoms and Molecules book series (PAMO)

This volume contains papers associated with the conference "Atomic Spectra and Collisions in External Fields II", that took place July 30-31 1987 at Royal Holloway and Beford New College. The first meeting of this name was held at the National Bureau of Standards in Gaithersburg, Maryland in 1984, and, if any tradition can yet be said to have been established in the series, it is that the proceedings be written after the conference. We hope thereby to preserve some impression of the discussions that took place, which in both cases were vigorous and unihibited. Both meetings happen to have convened in proximity to major developments in the field. At the time of the first conference, results of experimental measurements of dielectronic recombination in electron­ ion beams were beginning to appear. These showed large discrepancies with theoretical calculations, which were attributed to the effects of rather weak electric fields on the highly-excited states that mediate the recombination process. This conjecture gave rise to widespread concern in the plasma physics community that the representation of dielectronic recombination in existing plasma models, in which it plays an important role in energy and ionization balance, might be seriously in error due to neglect of the effects of electric and magnetic fields. The subject of field effects on recombination processes was thus a major focus of the 1984 meeting.