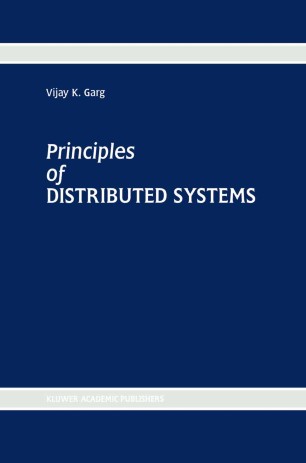 Distributed computer systems are now widely available but, despite a number of recent advances, the design of software for these systems remains a challenging task, involving two main difficulties: the absence of a shared clock and the absence of a shared memory. The absence of a shared clock means that the concept of time is not useful in distributed systems. The absence of shared memory implies that the concept of a state of a distributed system also needs to be redefined. These two important concepts occupy a major portion of this book.
Principles of Distributed Systems describes tools and techniques that have been successfully applied to tackle the problem of global time and state in distributed systems. The author demonstrates that the concept of time can be replaced by that of causality, and clocks can be constructed to provide causality information. The problem of not having a global state is alleviated by developing efficient algorithms for detecting properties and computing global functions.
The author's major emphasis is in developing general mechanisms that can be applied to a variety of problems. For example, instead of discussing algorithms for standard problems, such as termination detection and deadlocks, the book discusses algorithms to detect general properties of a distributed computation. Also included are several worked examples and exercise problems that can be used for individual practice and classroom instruction.
Audience: Can be used to teach a one-semester graduate course on distributed systems. Also an invaluable reference book for researchers and practitioners working on the many different aspects of distributed systems.