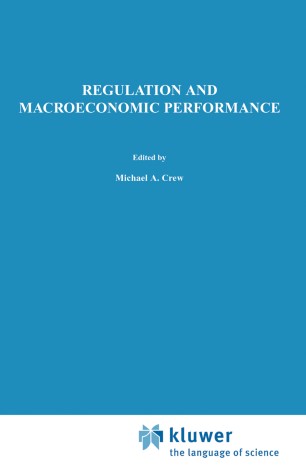 This project grew out of a recognition that I could fmd no aggregate measure of the amount of regulation beyond crude proxies such as the number of pages in the Federal Register. As I began to address this specific issue. I became much more aware of two things -- the enormity of regulation in the u.s. economy and the relative absence of economic research into the macroeconomic consequences of those regulations. While I would have readily granted the idea that many economist'> knew more about regulation than I did, I would have thought my knowledge of regulation to be at least up to the average economist's. My graduate training in the early to mid 1980s included special attention to the field of "public choice" and related topics, all of which occasionally explored regulatory topics. Moreover. I had at least a passing knowledge of the debates concerning deregulation in the late 1970s and early 1980s. Because of this, my own ignorance of regulation's actual expanse and its aggregate consequences startled me and heightened my interest in expanding empirical research into regulation as a macroeconomic influence. The more I thought about graduate macroeconomics classes and texts, the more that I realized the exclusion of regulation as a macroeconomic topic in spite of its massive scale and far-reaching tentacles.