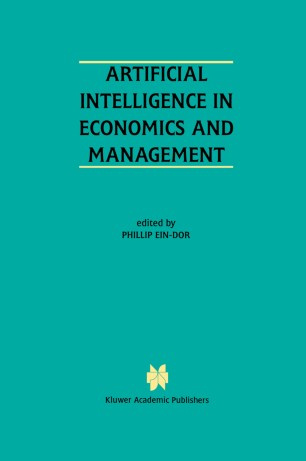 Artificial Intelligence in Economics and Managment

In the past decades several researchers have developed statistical models for the prediction of corporate bankruptcy, e. g. Altman (1968) and Bilderbeek (1983). A model for predicting corporate bankruptcy aims to describe the relation between bankruptcy and a number of explanatory financial ratios. These ratios can be calculated from the information contained in a company's annual report. The is to obtain a method for timely prediction of bankruptcy, a so­ ultimate purpose called "early warning" system. More recently, this subject has attracted the attention of researchers in the area of machine learning, e. g. Shaw and Gentry (1990), Fletcher and Goss (1993), and Tam and Kiang (1992). This research is usually directed at the comparison of machine learning methods, such as induction of classification trees and neural networks, with the "standard" statistical methods of linear discriminant analysis and logistic regression. In earlier research, Feelders et al. (1994) performed a similar comparative analysis. The methods used were linear discriminant analysis, decision trees and neural networks. We used a data set which contained 139 annual reports of Dutch industrial and trading companies. The experiments showed that the estimated prediction error of both the decision tree and neural network were below the estimated error of the linear discriminant. Thus it seems that we can gain by replacing the "traditionally" used linear discriminant by a more flexible classification method to predict corporate bankruptcy. The data set used in these experiments was very small however.