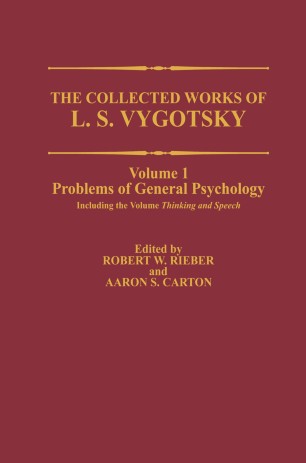 Problems of General Psychology, Including the Volume Thinking and Speech

Part of the Cognition and Language book series (CALS)

The Collected Works of Lev Semonovich Vygotsky comprise a series of six volumes, originally published in Moscow by Pedagogika between 1982 and 1984 and comprising the work done by Vygotsky between 1924 and his early death in 1934. The present vol­ ume is the first of this series to appear in English but it is actually Volume 2 in the Russian series. It contains a complete rendition of Thinking and Speech (which may be known to English readers as Thought and Language, the title assigned to an abridged, interpretative translation by Hanfmann and Vakar in 1962) and five Lectures in Psy­ chology which are here published for the first time in English and essentialIy comprise Vygotsky's systematization of psychological theory and data in respect to the develop­ ment in childhood of perception, memory, thinking, emotions, imagination, and will. The volumes which are yet to appear in English are respectively concerned with: (1) theory and history of psychology; (2) problems of developmental psychology; (3) child and adolescent psychology; (4) "defectology" (or "special education" in American par­ lance); and (5) a "scientific archive" consisting of a critique of Spinoza's studies of the passions and an important essay, "Tool and Sign. " The decision by the Translator and Editors to render the title of the first segment of this volume, Mysclzlenie i Rech', as Thinking and Speech and not as Thought and Language, as it was previously translated, was a very intentional one.