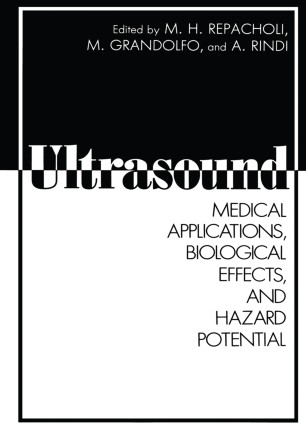 This volume contains the lectures presented at the International School of Radiation Damage and Protection at the "Ettore Majorana" Centre for Sci­ entific Culture in Erice, Italy, September 6-15, 1985. The sixth course of the School, entitled "Advances in Applications, Biological Effects, and Dosimetry of Ultrasound," provided an in-depth review of all facets of ultra­ sound interactions and their biological effects on living systems, allowing an assessment of the hazard potential of the various applications of ultra­ sound. Particular reference was made to possible health risks associated with medical ultrasound exposure since this use is by far the most prevalent. Since the initial application of ultrasound to submarine detection, medical diagnostic and therapeutic applications have become predominant over the past 20 years. The question of safety of this physical agent is an extremely important one. In many industrialized countries most pregnant women receive at least one diagnostic ultrasound examination before the birth of the child. Thus, potential hazards to the fetus are of prime concern. This problem has been aggravated by the fact that the medical diagnostic applications of ultrasound have far outpaced research efforts on biological effects. A further compounding factor of concern to clinicians and scientists has been the use of higher and higher intensities by the manufacturers of ultrasound equipment, particularly higher peak pulse intensities.