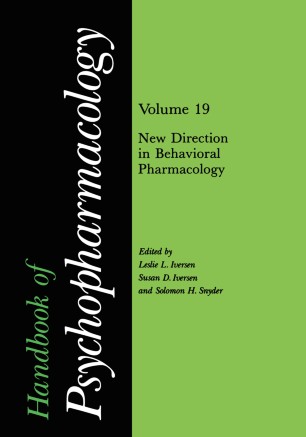 Volumes 7 and 8 of the Handbook were published in 1977. In Volume 7 methods for studying unconditioned and conditioned behavior were reviewed. Attention was given to both ethological methods and operant conditioning techniques as applied to some selected aspects of behavior. Genetic, developmental, and environmental factors influencing behavior were also discussed. In Volume 8, neurotransmitter systems, and in par­ ticular brain circuits, were discussed in relation to behavior and to the effects of psychoactive drugs on behavior. The coverage was not exhaus­ tive because of space limitations. The topics selected for review were, at the time, the focus of considerable experimental effort; they included homeostasis-motivated behaviors: sleep, locomotion, feeding, drinking, and sexual behavior. Brain dopamine systems were therefore discussed in depth, since they were already known to be centrally involved in motivated behaviors. Learning mechanisms and emotion were reviewed in the remaining chapters. In 1984 we initiated an update of behavioral pharmacology to review areas of progress within the same scope as the earlier volumes. This update continues in Volume 19. Among the contributions are several that represent important advances in analyzing behavior and the use of more sophisticated methods to define the effect of drugs on particular aspects of behavior. The chapters by Blundell on feeding and Miczek on aggres­ sion illustrate the sophistication of modern ethopharmacology.