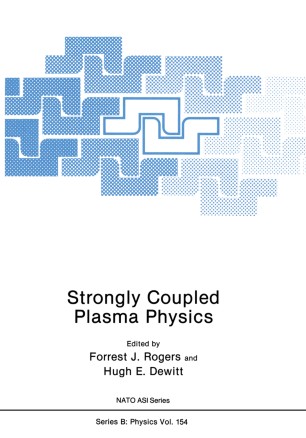 A NATO Advanced Research Workshop on Strongly Coupled Plasma Physics was held on the Santa Cruz Campus of the University of California, from August 4 through August 9, 1986. It was attended by 80 participants from 13 countries, 45 of whom were invited speakers. The present volume contains the texts of the invited talks and many of the contributed papers. The relative length of each text is roughly proportional to the length of the workshop presentation. The aim of the workshop was to bring together leading researchers from a number of related disciplines in which strong Coulomb interactions play a dominant role. Compared to the 1977 meeting in Orleans-la-Source, France and the 1982 meeting in Les-Houches, France, it is apparent that the field of strongly coupled plasmas has expanded greatly and has become a very significant field of physics with a wide range of applications. This workshop had a far greater participation of experimental researchers than did the previous two, and some confrontations of real experiments with theoretical calculations occurred. In the two earlier meetings the theoretical presentations were dominated by numerical simulations of static and dynamic properties of various strongly coupled plasmas. The dearth of experiments in the 1970's is now replaced by some very good experimental efforts.