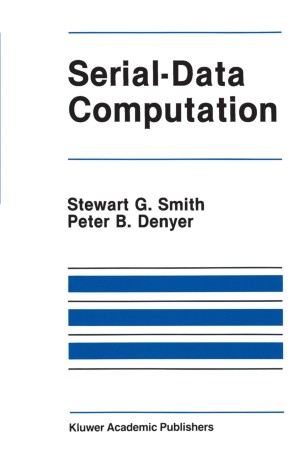 Part of the The Kluwer International Series in Engineering and Computer Science book series (SECS, volume 39)

This book is concerned with advances in serial-data computa­ tional architectures, and the CAD tools for their implementation in silicon. The bit-serial tradition at Edinburgh University (EU) stretches back some 6 years to the conception of the FIRST silicon compiler. FIRST owes much of its inspiration to Dick Lyon, then at Xerox P ARC, who proposed a 'structured-design' methodology for construction of signal processing systems from bit-serial building blocks. Based on an nMOS cell-library, FIRST automates much of Lyon's physical design process. More recently, we began to feel that FIRST should be able to exploit more modern technologies. Before this could be achieved, we were faced with a massive manual re-design task, i. e. the porting of FIRST cell-library to a new technology. As it was to avoid such tasks that FIRST was conceived in the first place, we decided to move the level of user-specification much nearer to the silicon level (while still hiding details of transistor circuit design, place and route etc. , from the user), and by so doing, enable the specification of more functionally powerful libraries in technology-free form. The results of this work are in evidence as advances in serial-data design techniques, and the SECOND silicon compiler, introduced later in this book. These achievements could not have been accomplished without help from various sources. We take this opportunity to thank Profs.